It was time for a new desktop PC. My newest PC was put together 3 years ago out of parts that were basically 2 years old then. I haven’t had a top of the line PC since my CUSL2 system around 2000-2001. So, I decided to treat myself this time out.

This new computer will not be a “gaming rig”, it will be an all-purpose workhorse. I expect it to play games, edit multi-media, run virtual machines, etc. I also expect it to last several years. In short, I expect it to be both tool and toy.
I wanted high quality, highly rated parts. I set an initial budget at $1500 and I went over that.
A solid week of research went into narrowing down the parts list. Next was trying to find some deals.

Part #2
Motherboard. z370 Chipset. Lots of good options out there. I needed to start narrowing down things. I’ve had good luck with ASUS, ASRock, and Gigabyte so that is my first filter. Wouldn’t mind dual-lan so I can dedicate one to VMs. Don’t want wifi. Want two M2 slots. After hours of bouncing back and forth between Google, Amazon, and Micro Center and settle on the Gigabyte Z370 AORUS Gaming 7. It was on sale for $200 and it had a $30 rebate to boot.

Part #3
Memory. I hate shopping for memory. Too many options, too many specs, just plain confusing. Screw it, I have good luck with G.Skill and I know I want 2x16GB. I popped over to their RAM Configurator. Honestly there were too many options there too. I went to my mobo memory support list. Criminy, they cant even order it by brand. After an hour or so of cross-referencing I decide on the G.Skill F4-2133C15D-32GVR.

Part #4 & #5
M2 SSD. 2 of them. There will be no spinning hard drives in this rig. Samsung period. Have bought over a dozen Sammy SSDs and had zero issues. It is between the Samsung 960 PRO or EVO. The PRO is faster but also more expensive. IMHO the EVO is a better value and I doubt I will notice the difference. I get a 250GB and 500GB. Smaller one for OS drive, larger one for data.

Part #7
Power supply. Modular only. I haven’t been impressed with PSUs since Enermax went downhill many, many years ago. The guys at [H]ardOCP seem to dig Sea Sonic. I’ve always been prone to overkill with my PSUs. I decide on the Seasonic FOCUS Plus Series SSR-650FX. It is quiet.

Part #8
Grrr… Not impressed by cases right now. Whats on sale? The Corsair Carbide Series SPEC-02 Mid Tower Gaming Case fits the bill. It’s OK. You’ll see in the pics below I yanked the hard drive cage cause I don’t need it. It’s freaking plastic anyway. Yes, plastic. I don’t think I would buy this case again because the water cooler fans/pump just barely fit. It took some finiggling to get it in there and there isn’t a millimeter of room to spare.

Part #9
Video card. I’ve already decide to go Nvidia. I’m also already at the end of my budget so the GPU will not be high end. Maybe this summer. I decide on the Zotac GeForce GTX 1060 AMP! Edition. At $270 it is a great bang-for-buck.

Operating System
Windows 10 Pro.
Linux was an abject failure. This PC needs kernel 4.13 plus to run. True support for this PC will be in kernel 4.15. Mint wouldn’t even boot to Live CD (kernel 4.10). Under Fedora KDE I was able to install Nvidia drivers but not VMWare Player. 3D and VMWare are a must. Fedora’s KDE was buggy as heck and I don’t do Gnome. I’m betting I don’t see this for a year. No biggie. openSuSE in a VM is fine for now.

All links are to Amazon.
All prices are what I paid.
* means purchased at Micro Center and were “In Store only” deals.
edited 17DEC2017 – forgot to subtract $30 rebate on mobo 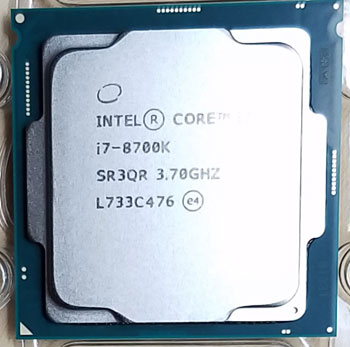 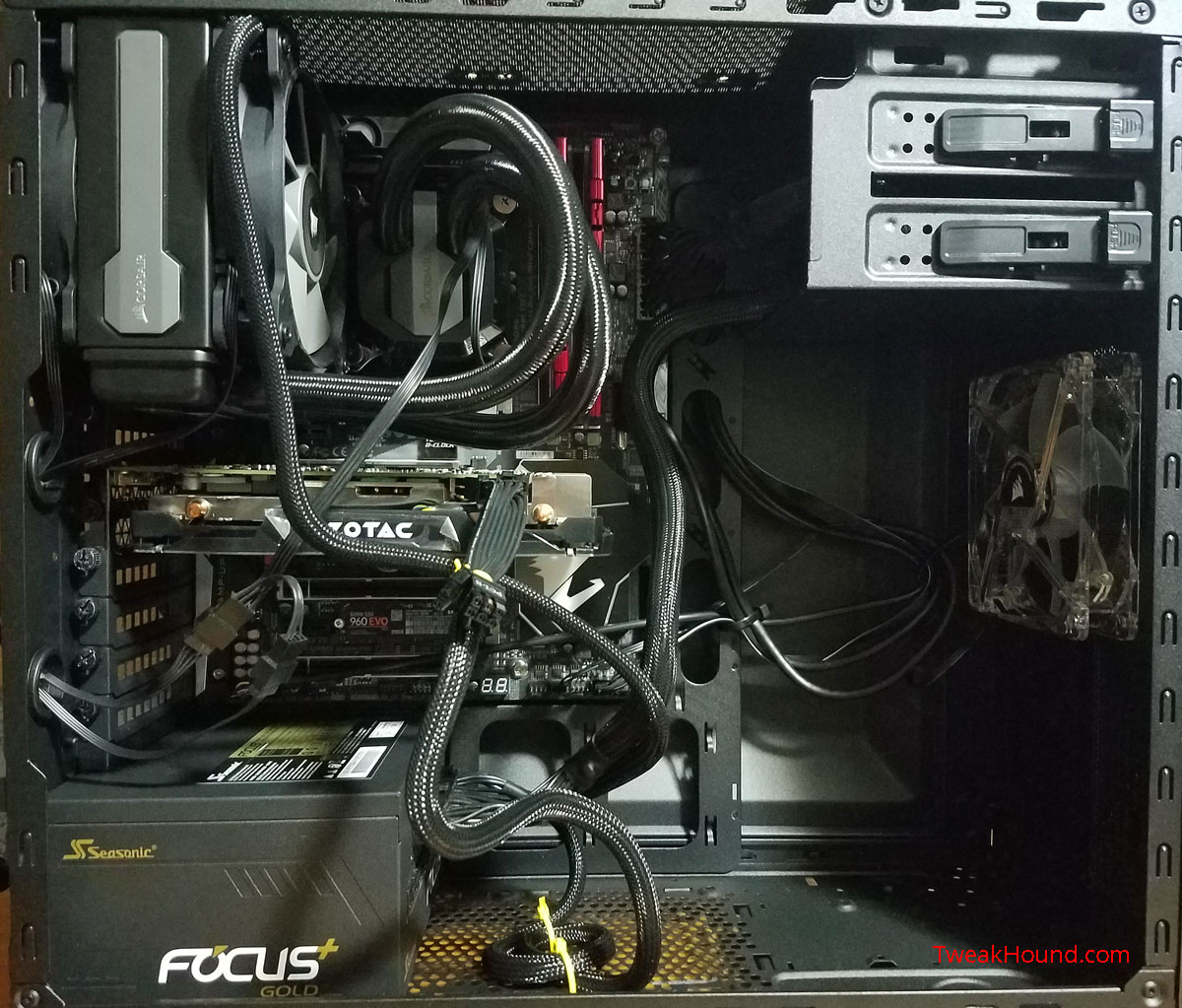 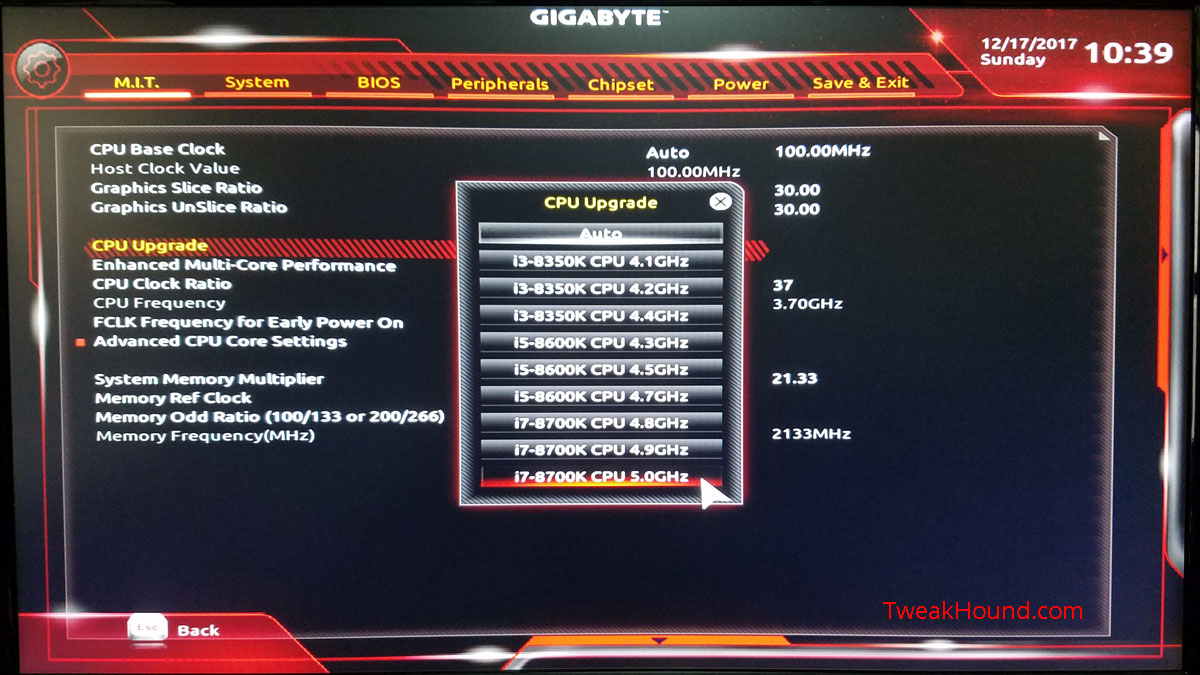 Pic just for info. Adjustments made in BIOS. 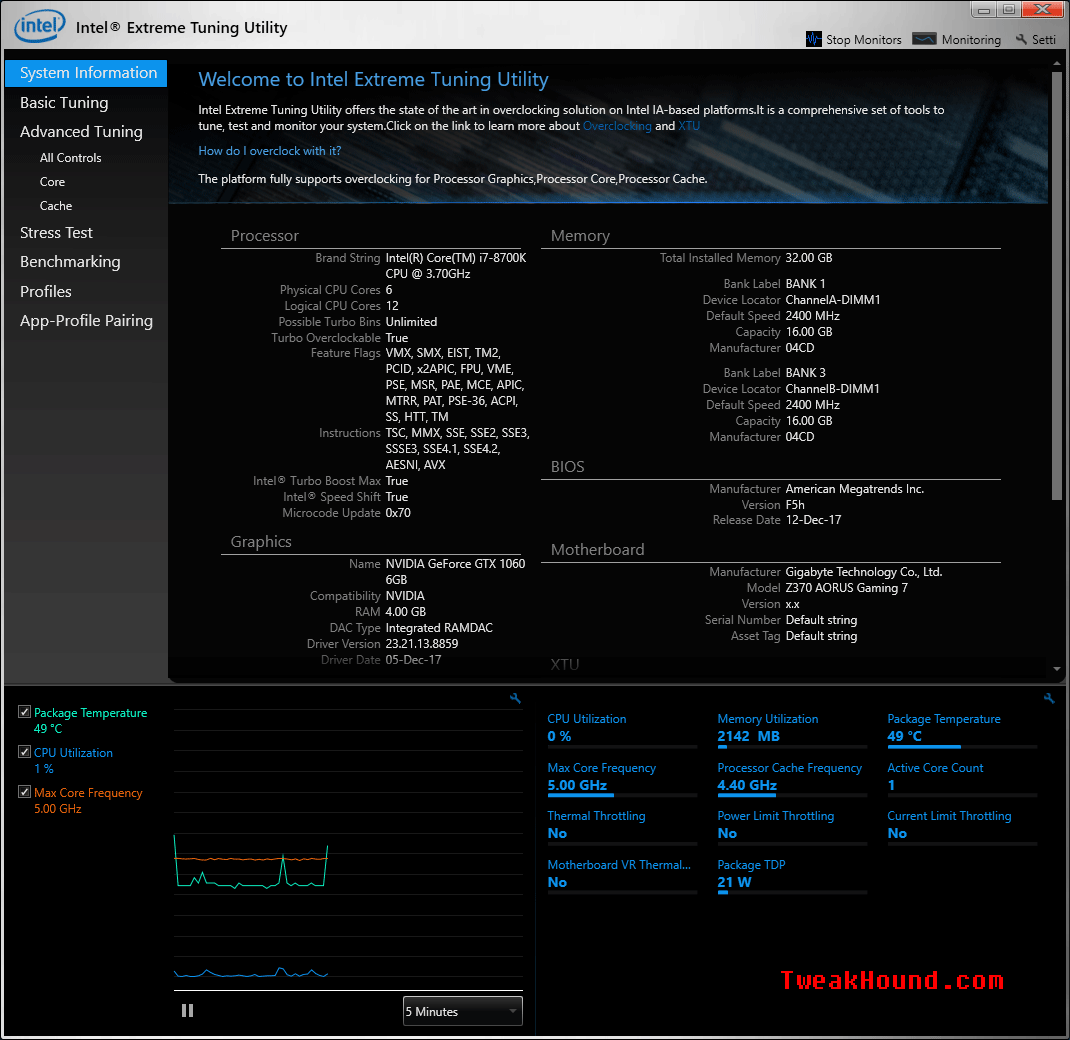 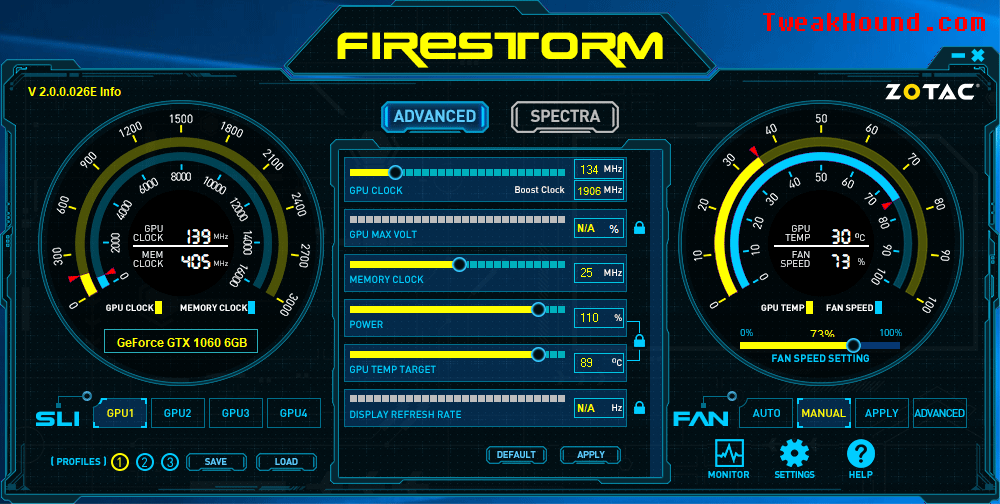 Benchmarks
Just a few. Not gonna kill my new board 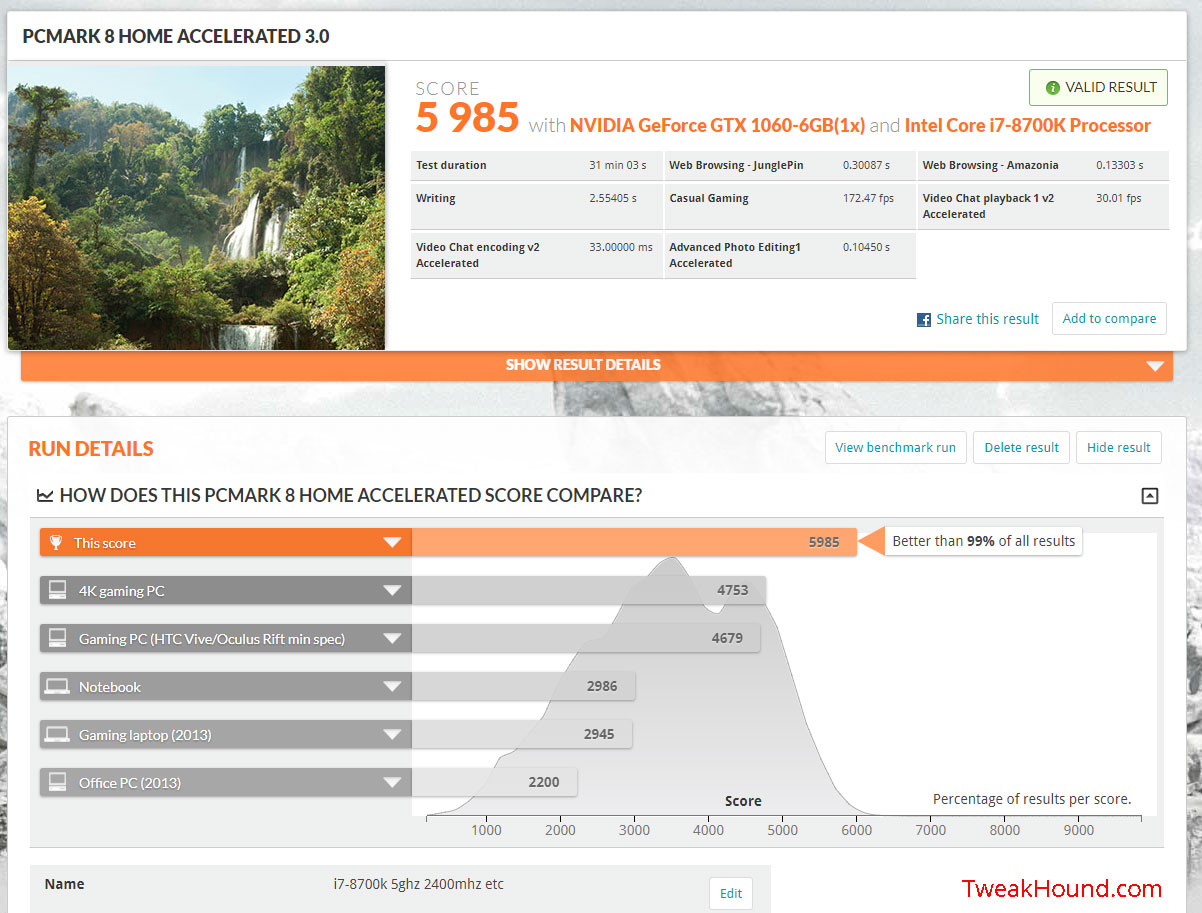 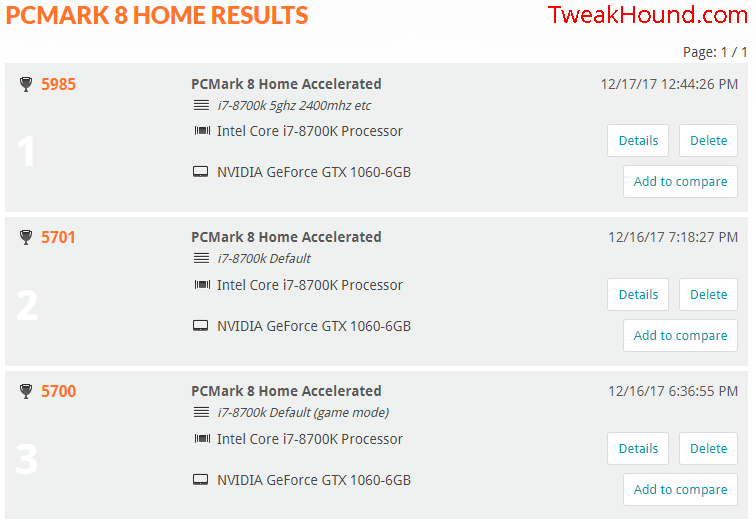 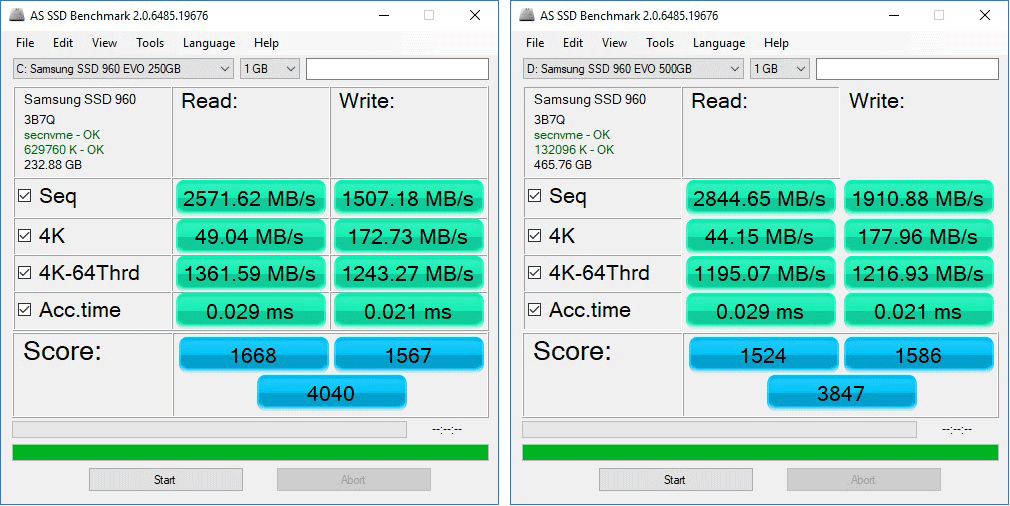