Release Date
– “Official” date unknown at this time. “End of May” often quoted. Expect it somewhere between tomorrow and hell freezing over.
– ISOs are floating around now

Preparing for 1903
– Update all your apps and drivers.
– Backup everything. Make a system image. I use the free Macrium Reflect. This is also a good time to backup everything else.
See also: Windows 10 Backup And Recovery Options

Tweaking Windows 10
It will be at least a month after release before the Win10 Tweak Guide is updated.

I don’t know why but a setting introduced in Win10 1809 is just recently making the rounds as a performance tweak.
END_OF_DOCUMENT_TOKEN_TO_BE_REPLACED

First and foremost, I do not backup from within Windows. I only use the boot CD.
Why? After many years of backup and restoring Windows and Linux I have seen just about every method fail at one time or another.
It is my belief that the only way to do an Operating System backup and restore is:
1 – Only use system images.
2 – Not to be using that OS. This is referred to as being offline.
END_OF_DOCUMENT_TOKEN_TO_BE_REPLACED

The hot news in the Windows world comes from a Reddit user that claimed Microsoft is collecting data in Windows 10 even when you tell it not to.
I have looked at this issue and I cannot confirm nor refute this claim. See below…
END_OF_DOCUMENT_TOKEN_TO_BE_REPLACED

Many programs on your computer access the internet even though they don’t need to. They phone home for a variety of reason including telemetry and checking for updates.
I don’t need or want most programs phoning home for any reason. Still, they try.
With programs getting more invasive I thought it would be appropriate to show you how to block their access to the net.
END_OF_DOCUMENT_TOKEN_TO_BE_REPLACED

It’s been a year since I’ve updated Tweaking Windows 10 and Windows 10 Privacy Settings.
In my humble opinion, not all that much has changed. At least, not for the way I use a PC. Screens look different, a few more options here and there…
For the Windows 10 Privacy Settings there were few significant changes. For the Tweak Guide, 9 of 21 web pages had changes, again nothing earth shattering. (FYI, pages 9, 10, 12-17, 19)
One thing I refused to put in the Tweak Guide at this point was anything related to Game Mode. I’ve yet to see any reliable benchmarks on this and in my own limited benchmarks I’ve seen no change at all.

If you have purchased a Win10 Tweak Guide and are due an upgrade, please forward your receipt to me.

Slowly working on updating the Win10 tweak guide. No ETA.
In the meantime, here are my current O&O ShutUp10 settings:
(click on image for full size) 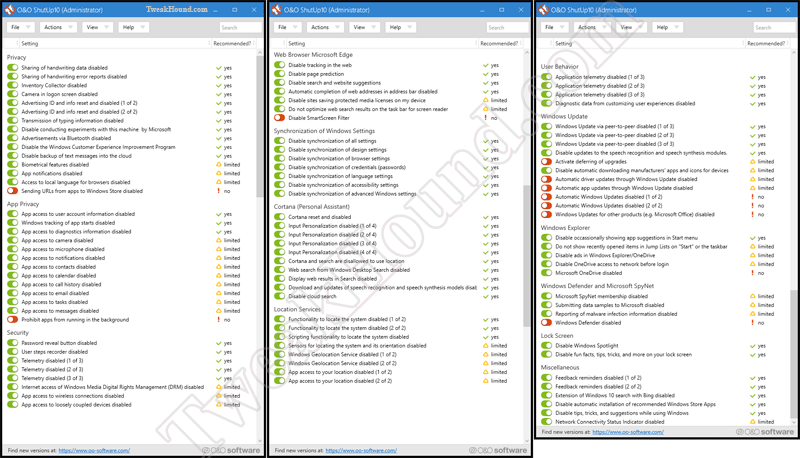 I’m going to show you how to use the powercfg command to find out info on your power plan.
I did this pretty quick. Let me know if I missed something.
END_OF_DOCUMENT_TOKEN_TO_BE_REPLACED