Former Google CEO predicts the internet will split in two by 2028 — and one part will be led by China
“I think the most likely scenario now is not a splintering, but rather a bifurcation into a Chinese-led internet and a non-Chinese internet led by America…There’s a real danger that along with those products and services comes a different leadership regime from government, with censorship, controls, etc.”
The way I see this unfolding is:
– Google sets up in China.
– China steals their tech and algorithms.
– China sets up their own heavily censored internet. All made possible by a greedy Google.
Use DuckDuckGo

Email Reveals Google Exec’s Effort to Help Hillary Clinton in 2016
“email…shows that a senior Google employee deployed the company’s resources to increase voter turnout in ways that she thought would help the Clinton campaign.”
Use DuckDuckGo

Why college students don’t vote absentee? They don’t know where to buy a postage stamp
Good news is these people didn’t vote!

Metallica’s ‘Black Album’ Hits Historic 500th Week on Billboard 200 Chart
“Metallica’s self-titled 1991 album (often referred to as The Black Album, due to its stark, black album cover) scores its 500th nonconsecutive week on the Billboard 200 chart. It is now one of only four albums with 500 weeks or more on the tally…Among all albums — since the chart began publishing on a regular weekly basis in 1956 — Pink Floyd’s The Dark Side of the Moon holds the record for the most weeks on the chart: 937. It’s followed by Bob Marley and The Wailers’ Legend: The Best of Bob Marley and The Wailers (539), Journey’s Greatest Hits (539) and Metallica’s Metallica (500).
Metallica’s self-titled album marked the rock band’s first No. 1 on the Billboard 200, when it debuted atop the list dated Aug. 31, 1991. The set spent four weeks on top, and marked the first of so far six chart-toppers for the group.
The album continues to hold the record as the biggest selling album in Nielsen Music history, with 16.83 million copies sold in the U.S. (since Nielsen began tracking data in 1991).”
Metallica – Metallica (“The Black Album”) 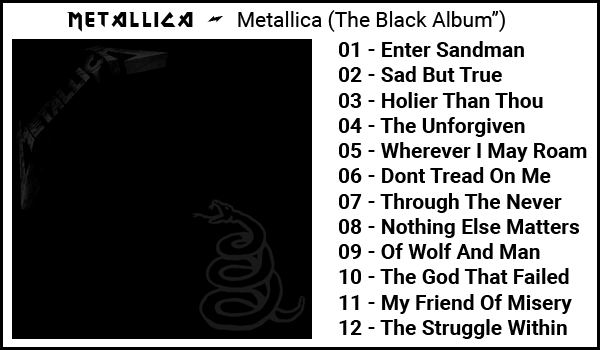