MS Office 2019 introduced a new item menu; right-click and empty space in a drive/file/folder and you get this twaddle: 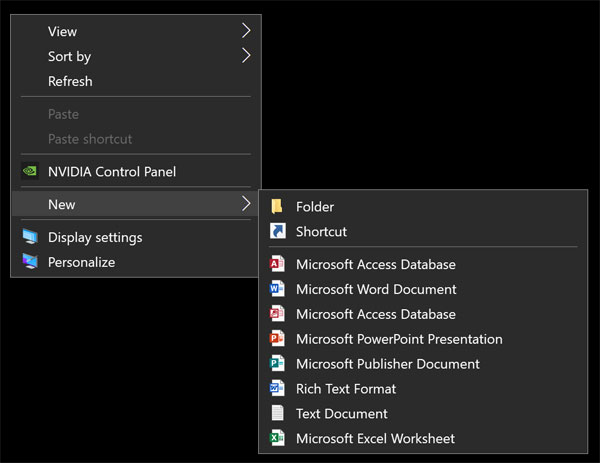 There are registry entries to eliminate these but one or all will come back after Office is updated, especially Access it seems.
END_OF_DOCUMENT_TOKEN_TO_BE_REPLACED

LibreOffice 4.2.1 released.
“This is the first bugfix release from the 4.2 branch.”
Download
Release Notes

The free office suite LibreOffice has released version 4.1.1.
“This is the first minor release of the LibreOffice 4.1 family, which features a large number of improved interoperability features with proprietary and legacy file formats.”
Download
Release Announcement

Picked up this news on Twitter this morning.
Office Mobile for Office 365 at Google Play Store

LibreOffice 4.1 was released this morning.
“The office suite features a large number of improvements which bring compatibility with proprietary and legacy file formats to the next level”
Release Announcement
Download

Microsoft Office 2010 Service Pack 2 is out. It is available via Windows Update as well as downloadable.

Service Pack 2 (SP2) for Microsoft Office 2010…contains new updates which improve security, performance, and stability. Additionally, the SP is a roll-up of all previously released updates.

Updates are also available for the Visio and PowerPoint viewers via Windows Update.

LibreOffice 4.0.4 has been released.

LibreOffice 4.0.4 features many improvements in the area of interoperability with proprietary document formats…LibreOffice 4.0.4 also solves a number of bugs and regressions over the previous release.

The Document Foundation announces LibreOffice 4.0
This is a free Microsoft Office alternative.
Download