Whether you installed Windows 8 on an SSD or moved Windows 8 to an SSD all that is required is to run the Windows System Assessment Tool.

This tool discovers you have Windows 8 installed on and SSD and adjusts the appropriate system settings (see below).

Most users see the output of this via the Windows Experience Index.

You should run this tool if:

3 – You messed with any settings related to “SSD tweaks”

4 – You aren’t sure if your system is optimized for an SSD.

To run (or re-run) this tool you can do it several ways:

Below is the best explanation I could find as of this writing (SOURCE):

Hello, In Windows 7 – we turned off defrag for SSDs as you mention in your entry; but in Windows 8, we have changed the defrag tool to do a general optimization tool that handles different kinds of storage, and in the case of SSD’s it will send ‘trim’ hints for the entire volume;

SSDs are storage devices made of flash memory; flash memory unlike hard disks are block erasable devices – they can be written to at a byte level but need to erased at a block level; Trim is a storage level hint that was introduced in the Windows 7 days to indicate that Windows is not using certain regions of the storage device; NTFS will send these trim hints when files are deleted or moved from those regions; SSDs consume these hints to perform a cleanup in the background called as ‘reclaim’ that helps them get ready for next writes. The SSD may choose to perform the optimization immediately, store the information for later optimization or throw away the hint completely and not use it for optimization since it does not have time to perform this optimization immediately.

In Windows 8, when the Storage Optimizer (the new defrag tool) detects that the volume is mounted on an SSD – it sends a complete set of trim hints for the entire volume again – this is done at idle time and helps to allow for SSDs that were unable to cleanup earlier – a chance to react to these hints and cleanup and optimizer for the best performance. We do not do a traditional defrag (moving files to optimizer there location for space and performance) on SSDs.

Pic: A view of Windows 8 defrag optimizing (running Trim command) on an SSD. 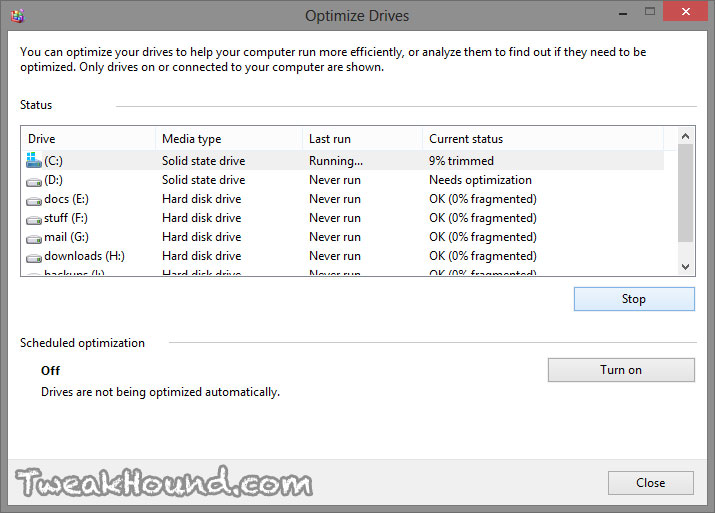 You settings should be:

1 – Superfetch service should be ENABLED which is the Windows 8 default.

It should be noted that once Windows 8 discovers it is installed on a SSD it removes the EnableSuperfetch value entirely.
Leaving the value and setting it to zero amounts to the same thing.

*NOTE – As of this writing I can’t find a good explanation of the changes in Superfetch in regards to SSD’s. I am sure Mr. Russinovich or someone else at MS will get to it eventually.
(If you can point me towards some official info I would appreciate it)
Until then I offer this from the help section of the Intel SSD Toolbox:

In Microsoft Windows Vist and Windows 7, Superfetch tracks and copies your most frequently used applications to system memory to reduce load times. Superfetch is based on the similar Prefetch feature available in Windows XP. Superfetch/Prefetch is not needed on an Intel SSD under Windows 7 or Windows Vista, and should be disabled for optimal performance.
In Microsoft Windows 8, Superfetch functions differently than in previous versions of Windows, and should not be disabled for an Intel SSD.

If You Have Moved Windows 8 To An SSD

If you initially installed Windows 8 on a hard drive and moved it to an SSD there is an important change to one setting you should be aware of.

The registry key msahci does not apply to Windows 8.

Please see the bottom of this article for full instructions on moving Windows 8 to an SSD..

Optimizing Your SSD In Windows 8

“Optimize” is what Microsoft and others call running the trim command.

You can do this manually or schedule it via defrag: 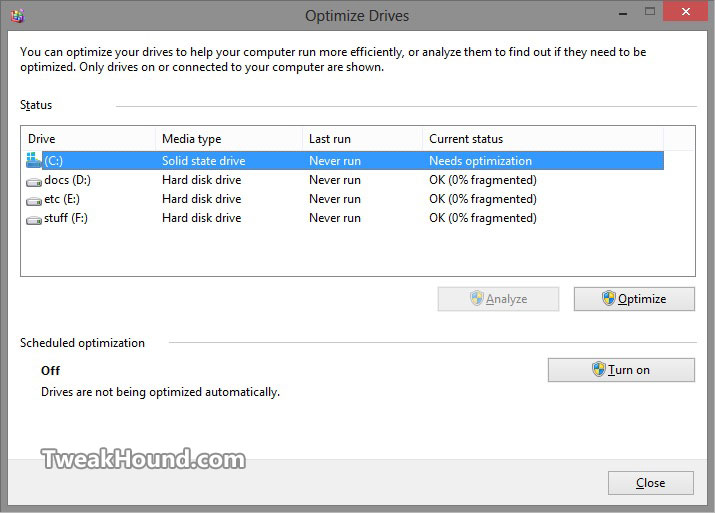 Pick a schedule, and Choose your SSD drive > click OK to exit out of the screens. 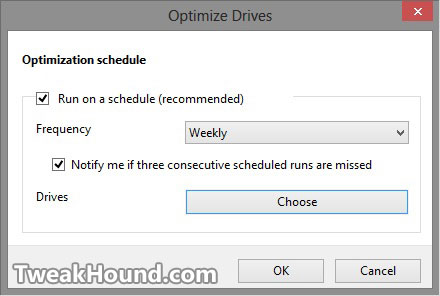 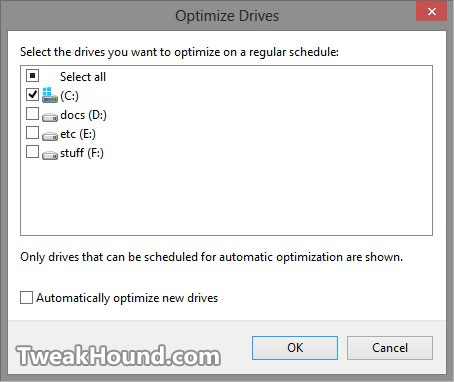 Optimizing Your SSD In Windows 8 With The Intel SSD Toolbox

If you have an Intel SSD you can use the Intel SSD Toolbox to optimize your drive. 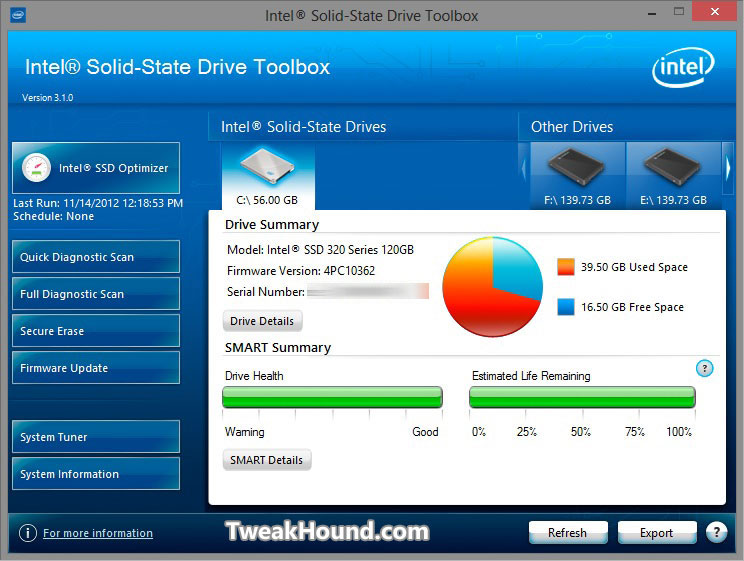 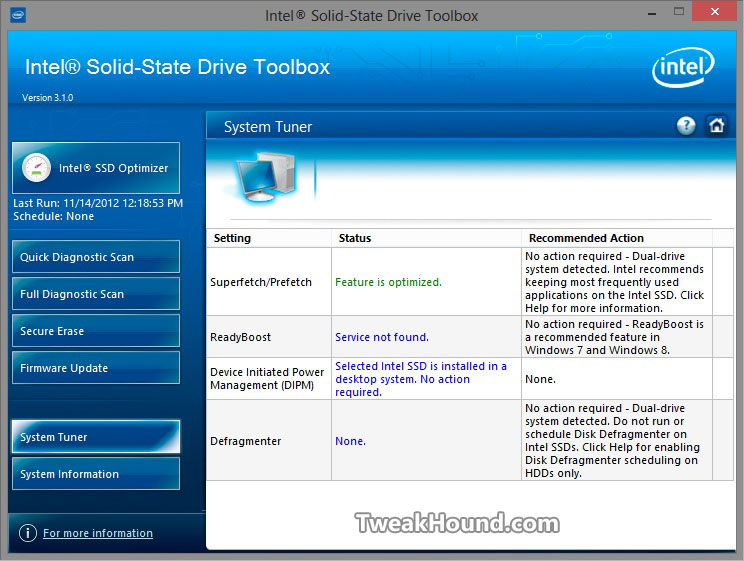 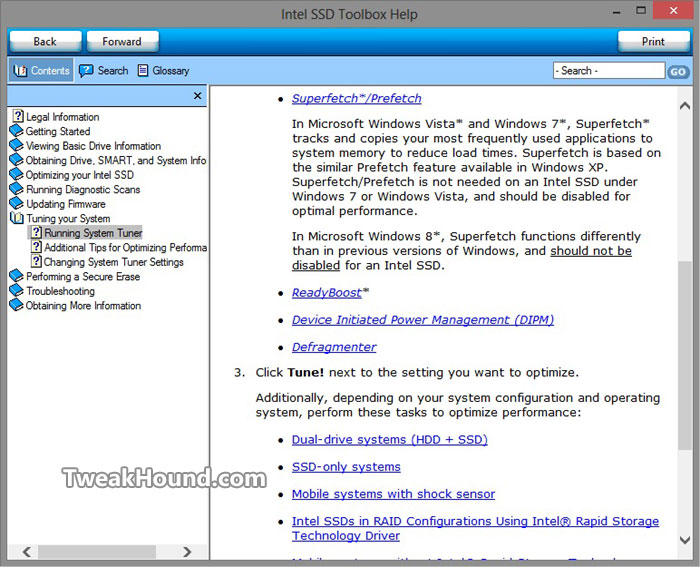 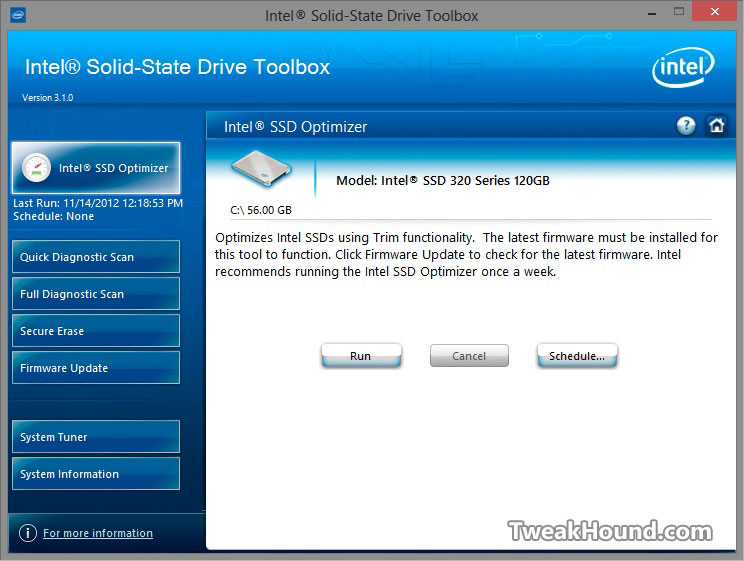 How To Transfer Windows 8 To New SSD

1 – Keep your configuration as is. Plug in SSD drive (as a spare) and boot up as you normally would.
2 – If possible use a Windows 8 disk to create a new partition on your drive (see: Install Windows 8 – Clean Install With Upgrade Media).
3 – Windows 8 will install correct driver.
I recommend you download and install the latest chipset drivers and/or storage drivers for your system regardless of OS.
Intel recommends you use the Intel RST Drivers for their SSD’s.
Intel RST Drivers can be found here:
http://downloadcenter.intel.com/ see section Solid State Drives and Caching > Intel High Performance Solid State Drive > your SSD model
Intel chipset drivers
4 – Image OS drive
5 – Transfer image to SSD
6 – Start up into your BIOS setup. Check to see if you have an AHCI setting (yes / no ? ). Don’t change anything yet. Exit BIOS setup.
7 – Boot from SSD (windows may install hardware).
8 – If you have an AHCI Change registry setting (Press the Windows + R keys > type regedit > navigate to the key below):
HKEY_LOCAL_MACHINE\SYSTEM\CurrentControlSet\Services\storahci
Change the value for Start to 0.
“Start”=dword:00000000
DO NOT DO THIS IF YOU DON’T HAVE AN AHCI SETTING IN YOUR BIOS.
9 – Reboot
10 – Enable AHCI in BIOS if capable.

As I had found earlier (Windows 8.1 RTM And SSDs) Windows 8.1 IS NOT optimizing itself for SSDs. This is a direct result of pulling WEI / Winsat assessment.
– All 4 machines SSDs were correctly identified as such (check defrag).
– All prefetch settings were:
HKEY_LOCAL_MACHINE\SYSTEM\CurrentControlSet\Control\Session Manager\Memory Management\PrefetchParameters
“EnableSuperfetch”=dword:00000003
“EnablePrefetcher”=dword:00000003
– ran winsat formal, rebooted. Prefetch settings changed to:

The EnableSuperfetch value was removed.

Start value changed from 1 to 0

I recommend you run winsat formal.
Press the Windows + R keys and type winsat formal .
Now check the folder C:\Windows\Performance\WinSAT\DataStore for the scores.

Go to the above key ( press the Windows + R keys type regedit) and remove the EnableSuperfetch value and change ReadyBoot value.

***Updates***
1/1/2013
Changed EnablePrefetcher from 1 to 3.
Added noted about Windows removing the EnableSuperfetch key.
1/2/2013
Added pic for Defrag / Trim.
Added note about how I got these settings.
Clarified and separated different Prefetch reg keys.