I’ve nothing of consequence to report today.
I hope you have a great weekend. Sending you some Good Vibrations.

Though they were popular way before my time, The Beach Boys are still one of my favorite bands. Sometime in my late grade school to middle school era, a TV station out of Detroit (WKBD,channel 50) had “Beach Movie” marathons quite often. I don’t know why but my friends and I latched on to them and 60’s surfing music.
Around that time (1979 according to wiki), Sunkist launched it’s “Good Vibrations” ad campaign. A local AM radio station got in on the act and I was caller # whatever and won a “Good Vibrations” package consisting of a Sunkist t-shirt and The Beach Boys Endless Summer album (still have it). Ironically this album did not have the song Good Vibrations on it. I wore that t-shirt until it didn’t fit anymore and then cut the bottom off and wore it under my football shoulder pads.
One of my Uncles took me to my first Beach Boys concert at Pine Knob in 1979 (pretty sure it was 79, could’ve been 78 though).
Anyway, I’ve seen them many times since then. Here is one of their many great songs… 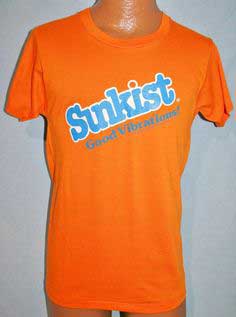