This is how I studied for and passed the Cicerone Certified Beer Server exam. I am not “in the industry”, I’m just a Geek who loves craft beer. My goal was to actually learn and not only study to the exam itself. Toward that end, if all you want to do is pass the exam then much of the info below will most likely be overkill for you. 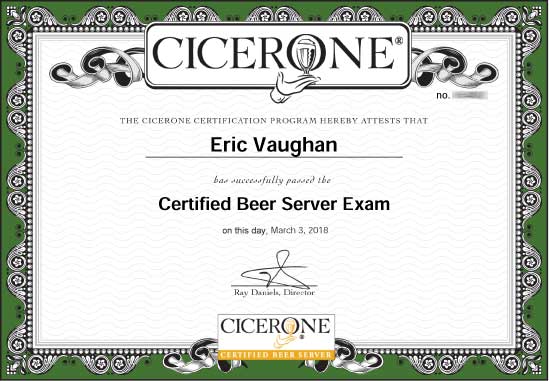 I started by taking this: P’s & Q’s: An Introduction to Craft Beer course, offered by the VCU Office of Continuing and Professional Education. It was $200. The course included the Tasting Beer book below. I wish I had read that before taking the course. I think I would have gotten more out of it. You might want to check your area for classes.

Tasting Beer (2nd Edition) by Randy Mosher – Everyone says read this. While not a page-turner it is very informative book that you really need to read. It is also full of stuff you don’t “need” to know for the exam.

Beer Scholar Study Guide for the Certified Beer Server Exam – $40 – Basically an extended cram sheet and several practice tests from someone who has taken the test. A couple of things were outdated and thus inaccurate. If you studied before you to got to this, which you should have, you will pick up these couple of things. I would rate this a 7 of 10 on the usefulness scale. For $40 I say go for it.

I created a little study guide for the highlights I felt were important. I’ve always done this for tests. Well, the ones I actually studied for. Not sharing it. For me this is a way to reinforce what I feel is important and learn it.

Bitterness
I hate this topic. IMHO, IBUs as a measurement sucks. They are trying to compensate for it’s complete lack of accuracy by using a new scale called Perceived Bitterness. PB use IBUs in the measurement calculation! Dammit!
IBU – IBUs tell you how much iso-alpha acid is in beer. Does NOT measure how a beer tastes. Frankly, I don’t understand why we even use this anymore.
Perceived Bitterness – Supposedly how bitter a beer actually tastes.
I would love to be able to watch this but it is members only: The IBU and Perceived Bitterness: How half a century of evolution in the brewing industry has affected the relevance of the IBU

My Beer History And Preferences
Like most American boys I grew up on the cheap stuff. When we were, well, not of legal drinking age we weren’t picky. Later when we were poor, college-age lads we were drinking; Stroh’s, Iron City, Lone Star, The Beast, Carling Black Label, Old Milwaukee, Schaefer, PBR. Coors if I had an extra dollar in my pocket.  Basically we drank most of the sh** beers in America. Interestingly enough most of them are under the same label today.
I joined the Army and was stationed in Germany for 2 years. Though I had the good fortune to have temporary duty in various locations, my base was Kriegsfeld Army Depot (aka Northpoint) near Kirchheimbolanden (god I miss the Schnitzel). I had lots of different beer from lots of different places. I have frankly forgotten most of them. I didn’t appreciate my opportunity then, youth is wasted on the young. Several things stand out looking back. Dopplebocks were awesome as were the Hefeweizens. Then, a buddy and I went skiing at the Zugspitze. We stayed at some old Army hotel in Garmisch-Partenkirchen. I remember seeing a sign for Budweiser Budvar. “That’s weird”, I thought, “I gotta try a German Budweiser.” My first sip told me this wasn’t anything like an American Budweiser. My second sip was, “wow, this is good!”. By the end of my 3rd or 4th glass I was hooked for life. Come to find out it wasn’t German at all but Czech and they are not related to each other. I also fell in love with Heineken after doing the International Four Days Marches Nijmegen. At some point I remember trying a Pilsner Urquell from out of Czechoslovakia (yes, that is what it was called back then). It is still one of my favorite beers, in fact there is some in my refrigerator right now (I get it at Wegman’s).
After the Army I returned home, back to college and back to the cheap beer. I don’t remember when but somewhere along the line I had my first craft beer. It was a Samuel Adams Boston Lager. I ordered it whenever I could afford it, or someone else was buying. Later I was to try their Octoberfest. It is still at the top of my list.
Over the next decade I was constantly trying new stuff, the craft beer movement was taking off, taphouses were popping up, even old restaurants now had taps with craft and European beer. The list of beers I like keeps expanding. I love “big” beers. I tend to stay away from the super-hoppy stuff. Here are some of my favs:
– Bourbon Barrel-aged anything 🙂
– Flemish Sours (Duchesse de Bourgogne, various Rodenbach’s)
– A good Wee Heavy makes me smile.
– Winter style beers. Maple flavors comes to mind.
– Gose. Anderson Valley The Kimmie, The Yink, & The Holy Gose was my first and is the standard I measure by.
– Dopplebocks
– A Guinness goes great with just about any meal.
– A Kölsch or a Czech Pilsener does the trick on a hot day. Great with any food too.

Up next?
edX – The Science of Beer – Free (Verified Certificate for $49 USD )